Japanese food culture is  a major source of inspiration for many, and its influence can be seen all around the world. Let me tell you about my personal experience with this incredibly rich, complex and diverse cuisine.

I first travelled to Japan about 30 years ago. A Tokyo restaurant called Isolde in Roppongi area, asked me to cook for its customers for just a week. Then I ended up going back to their kitchen for 3 years in a row…We became friends with the owner, Mr.Yamaguchi, who opened up our eyes on Japanese culture. He took us to street food, sophisticated restaurants, and even to the workshop of a blacksmith. My first visit to the fish market, which was still located in Tsukiji, was simply fascinating. That market was just like a live encyclopedia, where I kept going back over the following years.

Later on, we went back to Japan with my son Sébastien to participate to what they call “fairs”, and we cooked for the Hotel Okura, other places in Osaka and elsewhere. I also gave classes at the Tsuji Culinary Institute. Then in 2000, after an article about our signature dish called “gargouillou” was published, we were offered to open a restaurant in Japan. Not in Tokyo but on the Northern island of Hokkaido, in a location near Toya lake that looked just as remote as our own place in Laguiole.

Back then,  we had to fight with the owner to work with local producers. We traveled many times to Hokkaido to establish a list of all available regional ingredients. We tried and tasted all of them through various cooking techniques: slow cooking, elaborate cooking, fermentation, etc. It was only after completing a list of 320 ingredients that we came up with a menu.

In my own garden in Laguiole, I have a special area where I only grow herbs and vegetables from Japan, such as shiso leaves, sansho pepper, edible chrysanthemum…I also tried the lily bulb, but that one turned out to be quite challenging!

All these experiences in Japan made deep impressions on me. The special energy that the Japanese put in their own cooking opened me up to a new way of considering nature, ingredients, and of course dishes, through observation, questioning, lighting, and respect…

Even food that seems useless transforms into a delicious dish

The importance of cooking with small things was already on my mind back then, but I discovered the Japanese version of that principle.

My first discovery was in the basement where a couple was serving chicken on skewers in every possible ways, in a yakitori restaurant. Liver, gizzard, wings, neck skin, and more…each and every part was being cooked with amazing precision and attention to control a charcoal fire. The liver was perfect, the gizzard tender, the wing delicious, and the neck skin so crunchy and melting in the mouth I can still taste it today…

Even the parts which we would only use for stock, turned out to be real treats! I never miss an opportunity to go to these places when in Tokyo. Even with vegetables, cooking useless parts such as stalks or leaves, can lead to amazing discoveries.

Cooking vegetables in an amazing range of styles and expressions

Japanese cooking is all about nature, with every seasonal and local ingredient being honored as precious gifts to treasure.

I also discovered an array of vegetables, leaves, sprouts and shoots such as bamboo, stalk vegetables like the udo, roots such as the konnyaku…None of these are familiar to our culture, and opened my eyes to a new approach to food and cooking. I also discovered an amaranth called tomburi, seeds from the bassia scoparia that are served as garnish in seasonal dishes. It has a texture close to that of caviar and is also known as “land caviar”. I find theses seeds simply fascinating. The kinjisou was another discovery: an elegant and tasty leaf which Sebastien is particularly fond of. And it grows in our garden too! 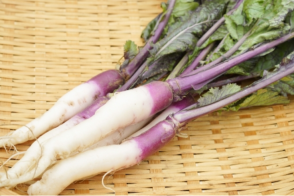 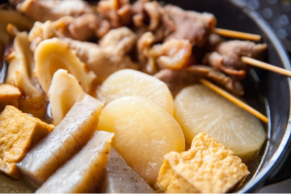 I also love all the local radishes or daikon, from tiny to bigger size, from the kabu to the big and round shogoin daikon, the hot radish karamidaikon… Japanese cuisine has elaborated specific ways to cook each of them, according to their texture, juiciness, and taste. Then there are wonderful bulbs such as the myoga, and my favorite: the lily bulb called yurine that unfortunately refuses to grow in my garden. It tastes just like a piece of velvet.

My first bite of a dried kaki or persimon hanged to dry outdoors on a string, has also been an unforgettable experience. I was also fascinated by all the variety of beans, including the incredible soja, which plays such an important role both for cooking and seasoning. Seaweeds and mushrooms also opened my eyes on new possibilities.

The level of sophistication in the way vegetables are prepared and cooked in Japan, is simply mind blowing.

The most important part of the Japanese influence being, of course, a fundamental respect for the product itself. Each ingredient is being prepared based on a thorough knowledge about all it has to offer in terms of texture, flavor and taste. To extract the best of it, it should be cooked without too much manipulation, and without too much seasoning with sauces or other ingredients.

Staying as close to the ingredient as possible is key, and Japanese cuisine has a lot to teach us in this regard.