Here is a simple and delicious fruitcake from the French countryside, so easy that even children could prepare it. Celebrate Father’s Day with the help of your little ones, and enjoy the best of the season : juicy, plump black cherries.

Originally from Southern Central France, the name (pronouce “kla-fou-tee”) comes from the word « clafir » which means « to fill », as it is mostly about filling the pan with fruits and batter.

A versatile recipe that could also be prepared with other fruits, such as plums, apricots, pears, black cherry version is the most traditional one. You should always choose your fruits ripe. Leaving the pits is another rule for clafoutis, as it brings a nutty flavor and also prevents the juice to mix with the batter.

(Michel Bras version of the clafoutis shot by the chef himself)

A pinch of salt

Lots of black cherries (or other fruits) 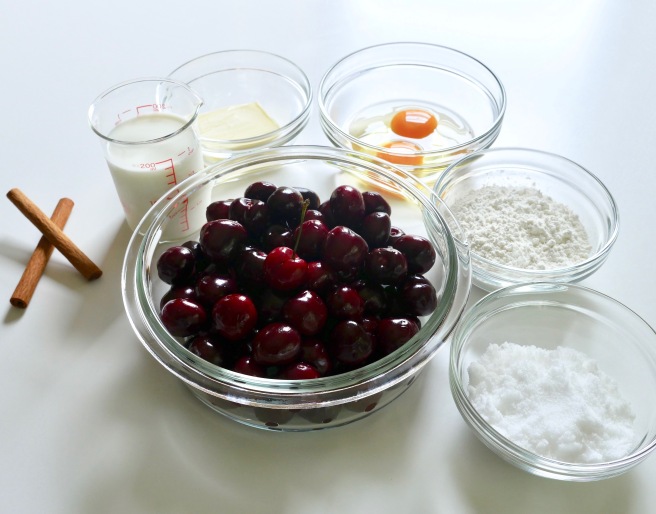 Slightly cook the cherries alone in the oven before mixing them in the batter. This will prevent them from falling too deeply in it. Take them out once they slightly changed their colors.

Whisk together the eggs and sugar in a large bowl. Add the flour, the baking soda, then the soften butter. Pour the lukewarm milk, add the salt and cinnamon powder.

Grease generously a 25 cm baking pan or cast-iron skillet with butter, then sprinkle powder sugar. Put the cherries in and pour over the batter. Adapt the proportion of fruits according to your own preference.

The best temperature to enjoy clafoutis is lukewarm, but you could also enjoy it cold. Sprinkle some frosting sugar to serve. 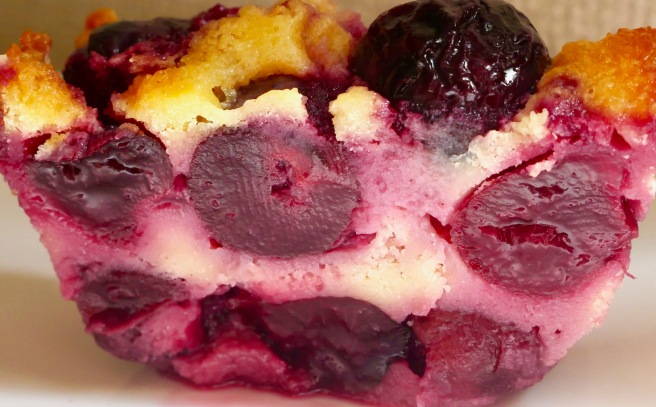 Did you know that in Switzerland, cherry pits used to be washed and sundried ?The Swiss would fill small cushions with them. Today, you can warm this cushion in your micro-wave and use it as a relaxing tool. The pits will retain the heat for about half-an-hour, bringing a soothing effect to your neck or ankles. Several hours in the freezer will turn it into an ice pack too. Don’t throw away your cherry pits !

Cinnamon is the bark of a small tree from that belongs to Lauraceae family, like the laurel. It originally comes from Ceylan, today’s Sri Lanka.